Want to check out some of the best creator owned comic horror, sci-fi and bizarre?
Of course you do, and now it’s time for you to enter the Black Caravan!

This pack contains five different #1 issues of darkness from the Caravan….. 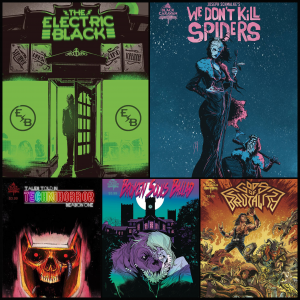 Black Caravan explores the darker side of creator-owned comics!

Want to check out some of the best creator owned comic horror, sci-fi and bizarre?
Of course you do, and now it’s time for you to enter the Black Caravan!

This pack contains five different #1 issues of darkness from the Caravan…..

Saint Abigail’s Institute creates monsters – and those monsters are teenagers! The story begins as several teens discover that they possess out-of-the-ordinary abilities, in each case related to their psychosomatic conditions. The resulting trauma caused by this horrific discovery leads them to stray from their normal teenage lives; some to seek answers, others in a desperate attempt to escape their terrible fate. Meanwhile, a mysterious organization working for the government begins to track down the kids with the goal of “bringing them home.”

The Electric Black is a cursed antique shop, appearing in any time or space, soliciting customers it hungers to corrupt or devour. The mysterious Julius Black is the store’s demonic proprietor and narrator. He, along with his psychopathic employees, regularly manipulates patrons for their own devious purposes. The poor souls that enter never leave without something. It’s dark light will shine on macabre mysteries, grisly murders, and other frightful occurrences. Dare you step within its sinister halls? 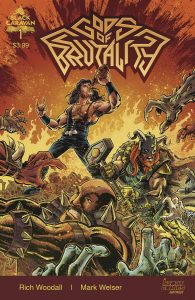 In 2020, Rock God Nick Dillion will step off the stage for the final time, ending his 37-year career as the head of the Metal Band: Gods of Brutality. They are about to release their final album, completing the story he set out to tell 37 years before. In his final interview, Nick reveals that when he died for 1 minute, 24 seconds in 1984, he was actually in hell, where he was tortured by demons. In an act of desperation, Nick prayed to any God that would listen. Thankfully his pleas were answered when Thor and Hercules were dispatched to save him. This is the comic telling of that story.

Tales Told In Techni-Horror is a biennial horror series that blends the best in horror sub genres (body shock to grindhouse and more). Each issue contains five short stories from the dark minds that brought you Provenance of Madness. Includes a mini pinup gallery of horrors.

In the early Viking Age, a faithless Norseman detective is summoned to a Scandinavian hamlet where a series of murders have occurred. Discovering the dark and bloody history of the village he investigates the local outcast, a necromantic witch who brings his atheistic values into question. Determined to prevent further homicides the two band together to discover the identity of a serial killer.