HALFTONE, DEE’S AND CAMILLO TEAM UP FOR A HECK OF A SERIES! 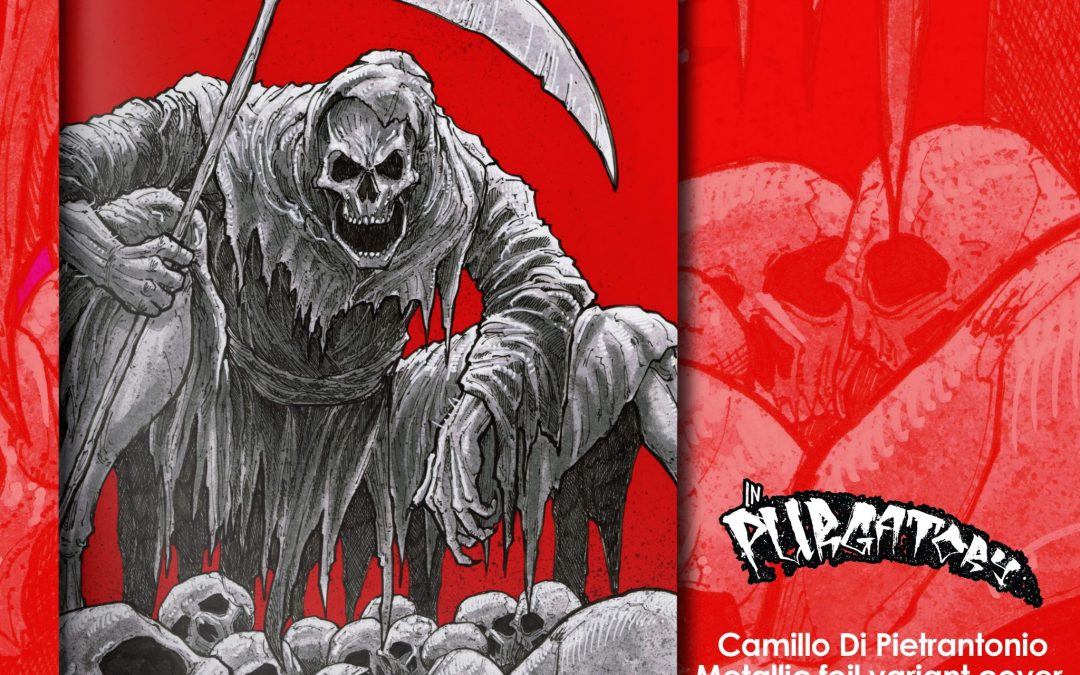 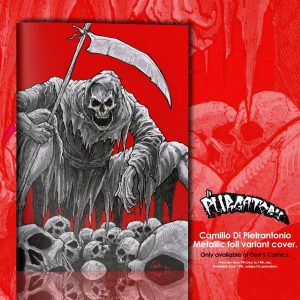 Visually unique, irreverent and funny, ‘In Purgatory’ kicks the afterlife in the nuts. What happens when you die? Kieran Jack will have you chuckling your way through the Underrealm.

For those of you coming in late, In Purgatory is one of the cheekiest, most irreverent and amusing comics Australia has to offer! The Underrealm, it’s supposed to be a place of rest for those who have passed into the afterlife, or so they thought…

Death, the guide to the recently deceased, has his deceased feet pulled from under him as a claim to the Underrealm comes forward, wreaking chaos and unleashing hell on the land of the living. Join Death, Mischief Maker, Thorn, Behemoth, Popobawa, Chronos and the riders of the Apocalypse, in this dark twisted tale of life after death.

Can Death trust anyone?

We’re excited to be teaming up with Kieran and guest contributor, our guy, Camillo Di Pietrantonio, to bring you this phenomenal Dee’s Exclusive cover for issue 6! Not only is this an amazing new issue of an absolutely awesome series, featuring an amazing cover and guest interior pages by Camillo, BUT, it’s also going to be a metallic cover! Sexy foily sexiness stamped onto sexy arty artyness…..YES!

The sixth part in this comic book series, ‘Sins of the Father’, we find Death now confronting his past life to deal with the oncoming storm.

Mischief Maker questions her recent affiliation with the Underrealm’s new leader and tries to make ammends with the riders. But, can all be forgiven?

Meanwhile our remaining riders try to band together a resistance against the Damien and his demon army.

Sounds good right? If you haven’t read In Purgatory yet, do yourself the favour!

Dee’s favourite, the Master Baker behind The Talking Bread and this crazy series, Kieran Jack, runs a small indie publishing company called Halftone Productions. After an incredible 2019 working on comics and attending conventions, he is excited to be back working on ‘In Purgatory’. Kieran has also had the opportunity to work with a variety of other creators on their comics recently, including The Wrath of The Cursed, XCT, Super Ready Battle Armor, Australia Burns, Harland Buck: Free Sword and Dark Oz comics.

You can check out more of Kieran’s work here: HALFTONE PRODUCTIONS

Dee’s favourite Camillo Di Pietrantonio, part-time ink ninja, semi-retired clown fighter, seal trainer and infant life coach is a remarkable upcoming talent. Not only did he contribute to stopping a worm invasion of earth but has contributed to a variety of Aussie comics, had work published in the Phantom, Killeroo and Exilium, did the now legendary TMNT #100 Dee’s Exclusive cover and has recently completed exclusive covers for TMNT The Last Ronin! Camillo has completed the absolute masterpiece Dee’s Exclusive cover for this issue and also contributes interior pages.

You can check out more of Camillo’s work here: CAMILLO ART

Issues #1-#5 are all available now and we’re very excited to open up pre-orders for the shiny, sexy, foily, metallic Dee’s Exclusive cover for In Purgatory #6!

Preorder now and you also receive a pretty smashing print by Matt Comms to go with your foily, sexy, shiny, metallic Dee’s Exclusive edition of In Purgatory #6! 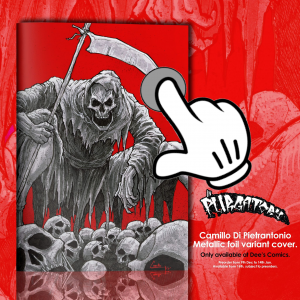