The X makes it sound cool! 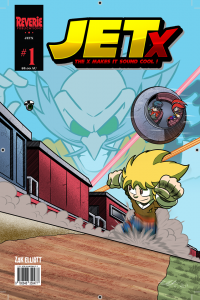 Mad scientists, killer robots, cosmic forces, a team of heroes, and a brash young speedster, Jet X #1 has the makings of a comic book classic….plus it has the ‘X’, which totally makes it sound cooler! 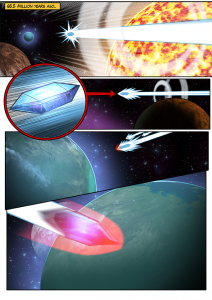 The mad roboticist Malicious Fingers is after 6 magical minerals, said to have come off the meteorite that wiped out the dinosaurs. Possessing these crystals will give him all the power in the universe and the only thing standing between him and ultimate villainous powers is teenage speedster Jet Stream, and his two friends Katrina McCain and Leon Grey. Together they have fought Malicious to thwart his evil schemes time and again! Now you can join their adventures and the ongoing battle to stop Malicious Fingers, wherever and whenever he strikes!

Dee’s mascot and manager, Gary the Stormtrooper, got together with Zak (at a safe social distance of course) to chew the fat and chat about his new comic series. As usual, we’ve trusted Gary to ask the hard questions, really get to some deep eternal truths, and like Jet X, he doesn’t disappoint.

Gary: Tell us about Jet X?

Zak: JETX is about a trio of friends who fight the forces of evil and go on many adventures, filled with action, some comedy and Sci-Fi elements.

Gary: Correct, 10 points, and we’re off to a great start. Chicken, beef or lamb?! 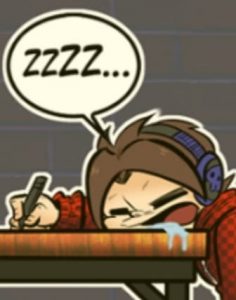 Zak: All of them.

Gary: aaaaaaahhh mixed kebab man ay? Very good. It’s your first comic, how do you feel about getting your first book printed and released?

Zak: It’s very alien to me, almost like it isn’t really real. Mostly because growing up, authority figures like teachers, work providers and generally people, always told me I can’t do this kind of thing like draw a book and sell it. And as someone who has a lot of mental barriers that makes finding a “normal” job, I feel like it’s a big middle finger to all
those people which pleases me a lot.

Gary: Jet X #1 has come up very nicely so you’ve done a good job, plus, middle fingers are my favourite too. Expanding on that, what is your background or history with comics? What drove you to create your own?

Zak: At a very young age I didn’t talk much, due to having social anxiety my entire life. My mother told me I didn’t start talking until I was 10 years old. During that time if I needed anything I would communicate with drawings. I guess that’s why drawing just stuck. And I was drawing all through school as well when I wasn’t supposed to, lol. In terms of comics, I drew some comics that were normally one page long or so of things Ive seen on TV and some to do with Video games. Which I played CONSTANTLY. (And still do!)
Which is still my primary source of inspiration for comic concepts and stories. In case you haven’t noticed that Jet would have a similarity to a certain blue spikey rodent lol.
Excellent segway to where the idea of the story and where it came from. I used to program little sprite based games and still dabble in it. JETX used to be a video game concept in which he looked very different from how he does now. Originally it was set in space, he lived on a Planetoid Space station orbiting Earth and Earth was dead and overrun with mutants. I changed it to be how it is today, and thats been around since about 2010. JETX #1 was drawn around 2014 so its been in my backlog for awhile now.

Gary: Sounds like something you’ve been cooking up for a bit then, and speaking of cooking, pineapple on pizza? Yes or no?

Gary: You will regret that answer, you have made a powerful enemy today. But, I digress. What should we expect/look forward to in Jet X #1 and the rest of the series?

Zak: Hopefully you’ll be able to see many interesting characters and world locations. A lot of over-the-top action scenes and explosions, can’t forget those! Also some cool backstories for established characters. Regarding the last question about how the idea used to be different. If you pay attention, you might see some of those old ideas in my future stories of the JETX world.

Gary: That sounds pretty cool, I’m guessing there will be no pineapple on pizza during the series?! Sorry Zak, that was a bit passive aggressive, it’s what I do in these interviews, I dig down to the raw emotions! For our final question, would you wear socks with sandles and what is your highlight of Jet X #1? 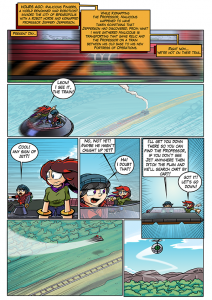 Zak: My highlight as the person who drew and wrote JETX #1 is everyone leaving the train scene. Drawing that scene was such a drag, so I would always say to myself “Oh god they’re finally off that bloody train.” Drawing a background constantly in motion is so tiring to draw and imaginatively draining. No matter how cool it looks to readers lol.

Gary: And socks with sandles?

Gary: Correct! hahaha well, and you’re right, it looks great to the readers! And as readers of arty type things, we want to know you suffer for your art! haha! The art in the train scenes is fantastic and throughout the book. Thanks for chatting to us Zak!