To celebrate 35 years of the Teenage Mutant Ninja Turtles and the milestone 100th issue of the current IDW series we’d like to show you the art for the Dee’s Retailer Exclusive cover and open up pre-orders for all you testudine fans, anthropomorphic turtle enthusiasts and shellheads! We’ve teamed up with Aussie/Italian artist, professional pygmy wrestler, bare knuckle clown fighter and Turtles super fan Camillo Di Pietrantonio to bring you this limited masterpiece of a comic cover!!

Camillo has worked for Frew Publications on the Phantom, contributed art and covers for Australian comics such as Killeroo and Bronwyn and has recently produced art for the Nickelodeon network in Australia for TMNT promotions.

We sent Gary the Stormtrooper to talk to Camillo and find out how this collaboration of awesomeness came about!

Camillo: Many years ago.. A small boy from a mountain village in Italy was at his local convenience store. The four year old saw a toy which immediately caught his interest. It was unique. Interesting..cool looking. And shared the name of his great uncle. Donatello….
The boy HAD to have this toy.
But the boys mother was part of the evil foot clan. And she refused to buy the toy of this boys new hero.
Fits of rage followed. The boy karate kicked the air in anger.
Months later the boy got the toy for Christmas and a love affair with the characters known as the ninja turtles started. 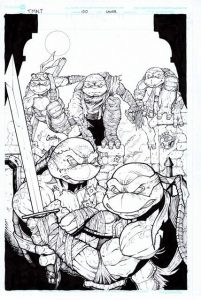 That boy was Camillo Di Pietrantonio.
Now. Many years later. That boy is a man. And his karate training has continued in the land down under. His weapon of choice……The pencil.
With the help of karate master Brendon from the Dee’s Comics dojo, they have been blessed with the honour of doing an exclusive variant cover for the milestone issue 100 of the tmnt by idw…… The foot won’t know what hit them. 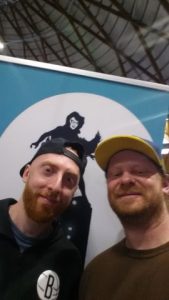 Being huge Turtles fans we are very excited to be able to offer this fantastic Variant cover through the shop and with Camillo. It has been an incredible partnership and experience working together with such a fantastic and talented Australian artist and we couldn’t possibly be any happier with the result. As Camillo and Brendon were long time turtles fans we settled on a classic look for characters. The design being a happy medium between old school and new, incorporating the latest addition to the TMNT family, Jennika. As this is our first exclusive for an international book, we wanted the most Aussie variation of the Dee’s logo for the back cover. After talking to Darren Close, creator of Killeroo, it was settled that we would use our Rufus/Dee’s logo, after all, a bad-ass mutant kangaroo seemed fitting to have on a book about bad-ass mutant turtles. Camillo was even able to sneak Brendon’s ugly mug into the background.

The expected shipping date is the 12th of December and we’ll be hosting Camillo on Saturday 14th in the Dee’s dojo for a celebration of the release of a momentous issue and one hell of an exclusive! Come down and meet the ninja behind the pencil and get your copy signed. 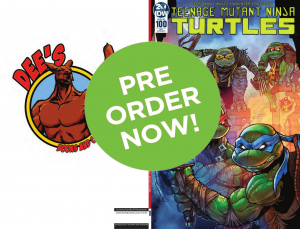