We Celebrate 35 Years of TMNT and Countdown to Issue #100!

Unless you have been living under a rock or avoided being a kid in the last 35 years, chances are you probably spent some time reading, watching, or playing with four adolescent reptilian martial arts experts that lived in the sewers of New York.

This year marks 35 years of the Teenage Mutant Ninja Turtles and while the characters originated in comic books published by Mirage Studios they quickly grew into a worldwide phenomenon expanding into cartoon series, films, video games, toys, and other merchandise gaining a place in not one, but many generation’s hearts.

The Teenage Mutant Ninja Turtles first appeared in an American comic book published by creators Kevin Eastman and Peter Laird’s own publisher Mirage Studios in 1984.
The concept arose from a humorous drawing sketched out by Eastman during a casual evening of brainstorming and bad television with Laird. Using money from a tax refund, the remains of a virtually empty bank account, together with a loan from Eastman’s uncle, the young artists self-published a single-issue comic intended as a bit of fun with a little parody of some of the most popular comics of the early 1980s: Marvel Comics’ Daredevil and New Mutants, Dave Sim’s Cerebus, and Frank Miller’s Ronin and Dark Knight Returns.

Eastman and Laird printed 3000 copies and after printing costs, they had just enough money left to run an ad in Comics Buyer’s Guide Magazine, an industry publication. Thanks to that ad, comic distributors across the U.S started calling, and Mirage sold all 3,000 copies within a few weeks. With more orders coming in, they printed another 6,000 copies and easily sold through those, too.
Although the comic was meant to be a “one-shot,” a single issue, self-contained story, they realised they might be on to something. So, in January 1985, they completed issue #2 and quickly received orders for 15,000 copies, which was so successful that distributors demanded 30,000 reprints of #1, and even more of a second print of #2. #3 fetched orders totalling 50,000 copies, and sales continued to climb, exploding at issue #8, which sold 135,000 copies and featured a guest appearance by Dave Sim’s character Cerebus, a barbarian aardvark.

The Turtles started their rise to mainstream success when a licensing agent, Mark Freedman, sought out Eastman and Laird to propose wider merchandising opportunities for the franchise. First miniatures, then toys before the creation and launch of one of the most beloved an iconic children’s television series ever made.

Since then there has been various incarnations of the turtles across various medias, it’s lead to one of the biggest comic book franchises outside of Marvel and DC. Each generation of fans has ‘their version’ of the turtles with the appeal of the four fictional teenaged anthropomorphic turtles named after Italian Renaissance artists fighting petty criminals, evil overlords, mutated creatures, and alien invaders while attempting to remain hidden from society unlikely to go away anytime soon!

The TMNT comic book series has been published in various incarnations by various comic book companies since 1984, but since August 2011, publisher IDW has been running the latest TMNT comic. This year, the fantastic series reaches it’s own milestone with the release of issue #100 in November, an increasingly rare occurrence with today’s trends of reboots and renumbers. It promises to be an epic culmination of eight years of storytelling but also the beginning of a new era and something truly special.

We didn’t want to let the 35th anniversary and milestone #100 pass without doing something special at Dee’s. Stay tuned for news of giveaways and offers in the lead up to #100 and also something big! We’ve teamed up with Aussie artist extraordinaire, Camillo Di Pietrantonio to bring you something very special…… 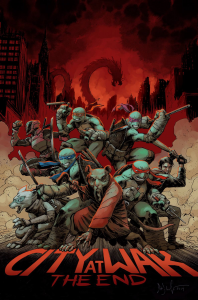