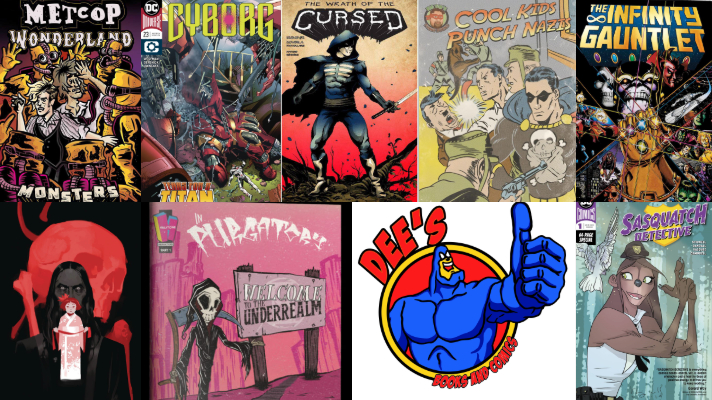 We often get asked what we are reading at the shop.

The answer is, lots of stuff!
It’s usually followed by “ha, so you can read and don’t just look at the pictures” but that aside, we thought it would be cool to share some of the books that tingled our spider senses, jimmy-ed our jams, and flexed our funk.

Even with a double sized issue, this is just not enough! Like Kyme’s previous comic series, he delivers a comic that while feeling familiar in style and invoking a sense of nostalgia reads and excites with a unique originality. ‘Isn’t that a little contradictory’ I hear you say, well it is, but Kyme somehow pulls it off. Picking up at the exact moment where issue #1 left off, shit is going down and blood, lots and lots of blood is going to be spilled!
Love vs. honour, duty vs. conscious, witness the wrath of the cursed.
You can check out more of Matt’s work at:
The Wrath Of The Cursed – Comic 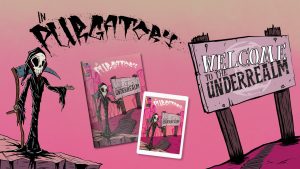 After the madness and hilarity of the Talking Bread, big things were expected from the insane baker Kieran, and he has delivered!
Unlike Talking Bread, In Purgatory is definitely not all-ages fare, it’s cheeky, it’s playfully insulting, hilarious and uniquely, visually spectacular. Kieran’s art style is always evolving and in this first issue we see distinctive and remarkable sequentials paired with snappy dialogue welcoming us into the world of the ‘underrealm’. What happens when we die? It’s an age old question explored with irreverence in this great new series. The guest art from Mr. Kyme is an excellent addition for some great tongue in cheek historical exposition. If you love cartoons that look like they should be for kids but most definitely aren’t, you’ll love ‘In Purgatory’ #1!

You can check out more of Kieran’s work at:
Halftone Productions 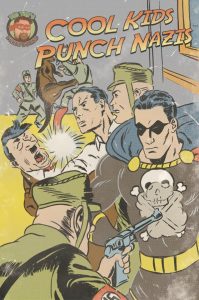 The title of this one should be enough to have you picking up this hilarious book by local boy Tim Stiles. It delivers exactly what it promises, nazi punching with a side of nazi punching! Is there a sight more satisfying then seeing nazi rotters receiving large portions of two-fisted justice? Nah, yeah, there isn’t!
In the style of double-take dubbing, classic golden age public domain comics are given the Big Tim treatment. Little Adolf gets it, while Kangaroo Man, Bingo, Black Terror and Teen Terror are now wise cracking and nazi punching their way into our hearts!
Check it out, it’s great!…..and it has good ol’ fashioned nazi punching!

You can check out more of Tim’s work at:
Big Tim’s Funny Books

Ha! Just joking! We didn’t read any Cyborg comics, Cyborg sucks, not even Cyborg wants to be Cyborg. 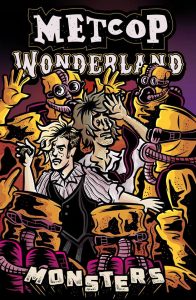 This series is pure gold! Metcop Wonderland has it all, mystery, adventure, action, thrills, laughs, great art, snappy uniforms, low level authority figures, aliens and public transport.
Issue #7 continues the tale of Alan Cooper’s heroism and there is a bunch of other stuff about demon trains, aliens, conspiracies and another minor character named Shane. But what has Alan, the finest officer to wear a metcop uniform, distracted from his duty and time-share on the Murray?
This series is a MUST READ!

You can check out more from the Metcops at:
Metcop Wonderland 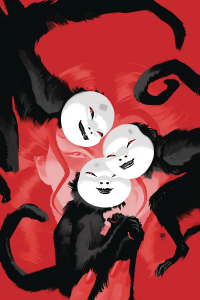 Crimson Lotus is one of those characters we find intriguing despite only ever having a brief appearance. Mike Mignola’s comic universe is ever expanding with stories like The Visitor, Koshchei The Deathless, Rasputin: The Voice Of The Dragon and now, ‘Crimson Lotus’. We know she was the top Japanese Agent in the Second World War and the nemesis of Lobster Johnson, and we know she was the mother of tragic hero Ben Daimio, but now we find out how and when. ‘Mignola-verse’ veteran Arcudi always delivers and Lee & Madsen capture the visual style and tone of a Mignola book well. If you haven’t read any Hellboy, BPRD or other Mignola books, you probably should, they’re all awesome!

WAIT! We actually read this one and surprisingly it was awesome! Most currently popular comics tend to be darker, the stories brutal, the characters angry, and the stakes are always worldwide catastrophe. Sasquatch Detective is a complete middle finger to the overly serious, broody, pouty, lycra wearing bad-asses that dominate the shelves and reminds us that comics are fun. A little silver age style silliness with cracking modern style art and storytelling. Take a chance on Detective Sasquatch for some fun for the sake of fun, it doesn’t have a point, it doesn’t have significance, it’s not shocking or brutal, it’s just entertaining like entertainment should be. 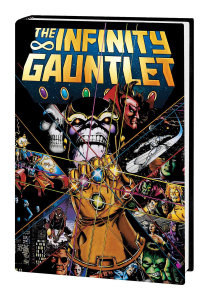 We all saw Avengers: Infinity War, it was not bad. As a movie, it was pretty good. BUT, re-reading this classic only reinforces that even the best comic book movie is still a STEAMING PILE OF CRAP when compared to an actual comic. Jim Starlin writes an awesome and epic cosmic conflict, Perez and Lim gives it the weight, the scale, and emotion that no special effects budget or cast of beautiful people could ever hope to achieve.
Even the Watcher shows up to… watch…