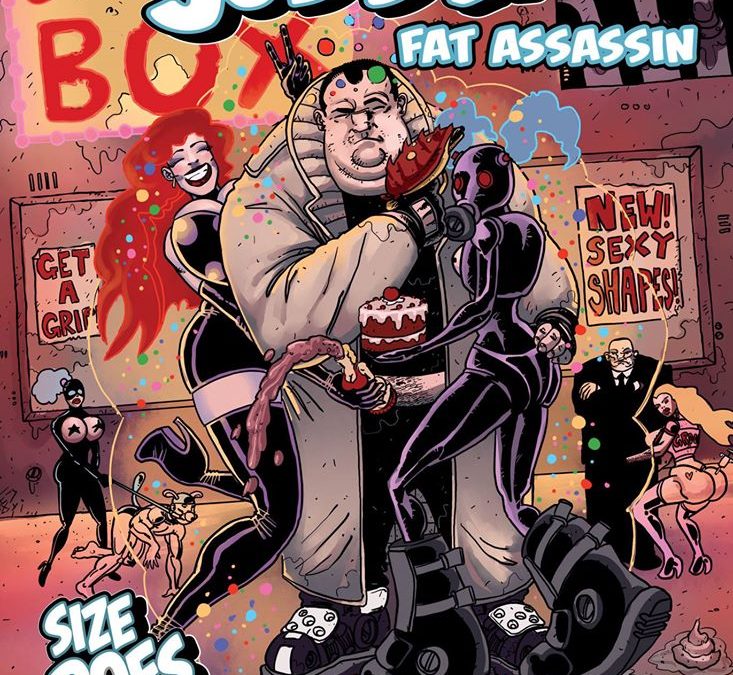 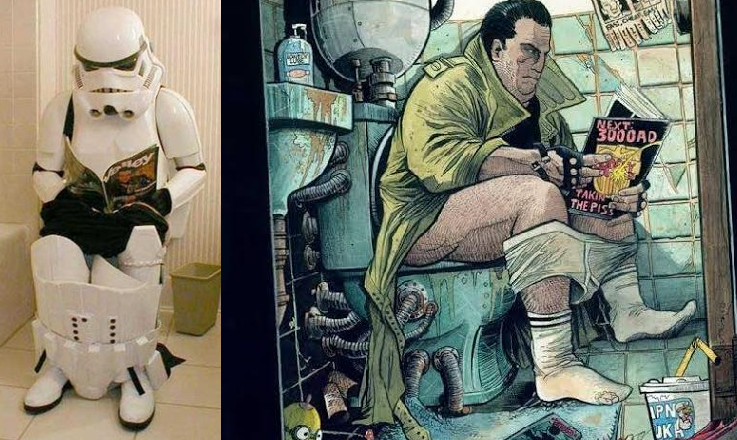 At Dee’s we make no secret about our disgust, revulsion, abhorrence, loathing and love of the Australian comic book Job Dun, Fat Assassin.

Job Dun, Fat Assassin is a full-colour, bizarro sci-fi comic about a rotund gun for hire trying to survive the smut-ridden streets of Ink-Blot, the VR dystopian city where filth and bastardry is never in short supply. Think of it as a demented hybrid of 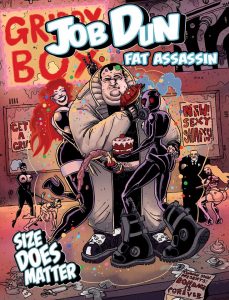 (Bisley’s) Lobo and Lobster Random, mixed in with a bit of Steve Aylett and Philip K. Dick, and sprinkled with a healthy dose of smut-noir. Or better yet, Blade Runner, but fatter – and sexier – with more dick jokes. Created by the loathsome and despicable stain on society Mark Hobby, Job Dun is indeed grotesquely beautiful, disguising poignant social and political commentary with foulness and hilarity. 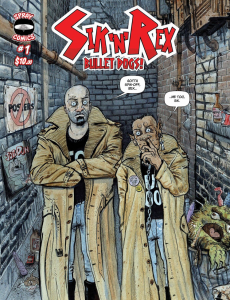 And it has a spin-off. Woof! Unfat and very unsexy, the very confronting ‘Sik n Rex Bullet Dogs’. Two outsider killers trying to play it rough, so dumb they think they’re smart, keeping it real to the point it’s just too real. Ripped from the pages of Job Dun, Fat Assassin it’s lo-fi, meta-sci-fi filth at it’s best, or worst. Looking to become the big mutts in town, these wanna-be thugs bite off more than they can chew when they come up against a local seductress with plans of her own. With Job Dun the only one who can save them, the question is: can he be bothered?

Gary the Stormtrooper, after making various sacrifices and committing unspeakable acts, was given the privilege of joining Mark in a local public toilet to exchange insults, make threats and talk about the big issues…….

Gary: Can’t wait for the next issue of Job Dun with art by Dan Watts and Ben Michael Byrne, when’s it out and after the ultra-violence approach to the last issue what can we expect?

Mark: Jesus, man, ease it with the enthusiasm and have some fucking dignity, saddo. Plus, I don’t want the pressure of having to deliver something good! Anyway (fuck!), next issue is going to be big, 44 pages big, complete with more Dun dick than you can ever hope for or frankly deserve. Yep, Dan and Ben are doing some great art, along with Adam Kindred and Khan Vokers, Tom Bonin and Darren Stephens – sick and talented bastards, all.

My proudest achievement has been the gradual corruption of Dan Watts AKA ‘the nicest guy in Australian comics’ who has taken to drawing dubious stains like a dog rubbing one out on its favourite blanket. Sure, he blames me, and who wouldn’t, I’m an arsehole, but I see myself as more a facilitator than a corrupter, leading horses to water and whatever. In fact, with complete modesty I can safely say I’m more like a rambling, smut-peddling, slightly confused Jesus, leading lost souls to a fast-tracked damnation. Not everyone is fit for it, some run away, some, like Ben, were there when I got there and will remain when I leave, but there’s a special place in my decrepit heart for those who open wide and whisper ‘more’. And Dan, ladies and gentlemen, wants more.

As for the issue, it represents something of a break from what’s gone before. After being told by countless reviewers and comic shops that Job Dun and Sik n Rex was not to their taste or not a good ‘fit’ (so piss off), or having pearl clutching wankers or incel sci-fi bros wrinkle their noses because it’s not relateable, or inspirational, or recoil at having to read it off-tit without the easy feed, I had some thinking to do. Sure, one option was to go for the middle-ground, make it kid friendly, family friendly, type you can read to your grandma friendly. Get it in those big comic shops, give advice, humble-brag achievements, bang on about my (fucking hell) ‘writer’s journey’, my personal brand, or creating an industry, or earning a living and just basically taking it all soddingly, boringly serious. Or, the other option was just to not give a shit, and up the offence. Make it as unsaleable and unreviewable as I possibly can. Frankly, the comic is a fuck you to ‘fans’, or a type of fan. Of that middle-road taste, of that ‘fit’. It’s other things too, but it’s that as well. So, represents a break from what’s gone on before with the comic, sure, but broader, it’s also a break from the state of play in pop-culture. Go the full David Britton and write the ugly side. That impulse has always been there, been the core to the comic, but it’s time to go further, Dunny Unchained as it were.

Having said that (‘Dunny Unchained’? Really, edgelord? ), those who’ve bought the book, got the joke, and will buy the book, not to mention the shops that stock it (All Star, Impact and the reprobates at Dee’s Comics), I love you as much as I possibly can (which isn’t much to be honest). But never mind me, it’s got ridiculously good art by excellent artists which you can legit admire while giving my mumblings a cursory glance. Did I mention it’ll have the dick of Dun inside? I challenge you not to rub yourself with its pages, staples and all. In fact my only regret is that I perhaps did not go far enough, who knows. Always the next one. But hey, as I’m fond of saying at 2am to the weird stain on my broken bed: do comics like no one is reading, ‘cos more than likely, they’re not. And that’s the other thing, I really don’t care if no one buys the thing. The shit will still get made, and fuck market forces and the demographics that suck them off.

But fundamentally, all this is part of my devious ploy to have any comic shop silly enough to stock the comic up on obscenity charges. Hi, Dee’s Comics and Books!

Gary: Would you double dip a chip?

Mark: Only if you’re watching.

Gary: Sik n Rex contained some pretty scathing commentary on modern comics, storytelling and the nature of the comic industry, what do you think has lead to the acceptance of mediocrity by the big publishers?

Mark: Well, as Walter Benjamin once said: “Piss Off, capitalist, you’re on my foot!”. He may also have mentioned something about the angel of history being swept up by a storm dubbed progress, all the while helplessly gazing upon the wreckage of the past, pile upon pile, unable to turn around to look forward. This was not considered a good thing, a bit of a dig at the Comintern as Nazis banged at his door. Seems the big publishers in contrast seem only too happy to gaze at the wreckage of the past, pile it up in mildly different forms and fuck turning around. And audiences seem to love it, or get hysterical when their favourite thing is done in a slightly different way than what they remember when they were a kid, stroking it for the first time, boring you to shitting tears as they declare how the thing ‘should’ be done. All this for toys. But it’s to be expected. Money talks and people in their 30s-40s are the ones with disposable income and so nostalgia trips and character regurgitation to attract that market dominate. Not to mention people have pretty much capitulated to the idea of brands, like not even put up a fight, so what we get now is this inane fan service to characters, divorced from the creators who made them, a spectacle of false consciousness and surplus labour, with people gormless and shuffling as if Debord or Marcuse never wrote a fucking thing.

Funnily, Pat Mills wrote something recently on his Facebook page, something along the lines that most pop-culture is right-wing orientated, the values and tropes of which readers assume are normal and, once internalised, make them feel safe and certain. Such a thing becomes ‘reality’, and its particular configuration is needed to get by in their lives. Anything different challenges that sense of safety and certainty. Unconvinced? Try change it up a bit and see who screams the loudest, makes the biggest threats. Fans like the same, as much as they say they wish for variety. They want certainty, why else does fan-art sell and there’s a seeming acceptance of constant reboots? They still want middle-of-the-road, that doesn’t challenge in story terms the underpinnings of what is considered ‘normal’. When you drive that with market power enjoyed by certain demographics, all that congeals into what slack-arses deign to call ‘reality’. Of course, I generalise and no doubt others would disagree. Things change, and are changing. Are they? That angel turning anytime soon? 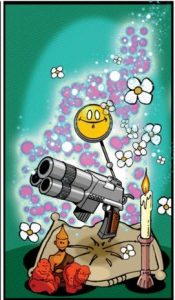 Politics aside, personally, I think a lot of it is imprinting, specifically centred at the genitals. Consumption is wanking, after all, a desperate replication when masturbation became a going concern. That first thrill of discovery, and the fear of someone walking in. A search for safety and certainty to minimise the risk. Some like Superman, some like brown hair. Others have things for post-boxes, others quite fancy Batman. Or, as a Mistress once said to me, “You want me to put it where?” Regardless, it’s all repeated stroking of things remembered, and brands try to keep that feeling until stasis (‘reality) kicks in, world without end, and anything heterodox is fought. Job Dun does something different, though it does not pretend to be anything other than it’s own form of wanking. While big publishers concern themselves with that moment of perpetual stroking with no expulsion, Job Dun, and Sik n Rex in it’s way, is more that bit after blowing when regret twists back to the dirty little decision you make to commit yourself to wank again. And you know there’s no going back.

Back to Benjamin (sure, why not?). He never lived long enough to see the involuted nature of fandom and its fetishised expression, though he would not have been surprised. However, I suspect, if he had seen it, he might have modified his description of the Angel of History a bit. Less looking back, more bent down, head up, nose deep inside its own arsehole.

Gary: You are indeed a foul depraved beast, but is there a soft side to Mark Hobby that enjoys stroking puppies and braiding young children’s hair? 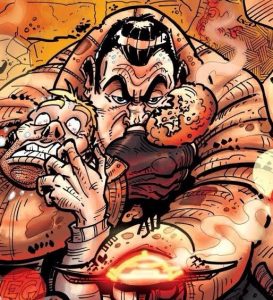 Gary: If you could be any animal, what would it be?

Mark: You made it weird, Gary.

Gary: Job Dun and Sik n Rex portrays a different take on the typical sci-fi dystopian future. The underlying themes of most sci-fi seems to be shared, what is it about your world that makes it distinct and separate?

Plus, fat ‘hero’, I guess, undercutting the notion of who is a protagonist. Or put another way, depending if you care for such things, it runs contrary to the current preoccupation for main characters being relateable – that tedious, preoccupation of the reader’s ego and it’s need to see itself in every stupid thing. Or that it matters.

Gary: Can Brendon kick you in the nuts?

Mark: One at a time, or all three at once? BE SPECIFIC, and stop playing with my emotions, damn you man!

Gary: Brendon has sworn to spitefully, systematically destroy you, what measures are you taking to protect yourself 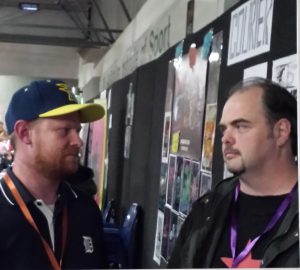 or do you welcome a slow, heinous death marred by a variety of depraved and vile acts?

Mark: I know an old ninja trick which involves me putting my hand down my pants and shitting on it. Come over. See what I do with it next.

If you haven’t yet, check out Job Dun, Fat Assassin!